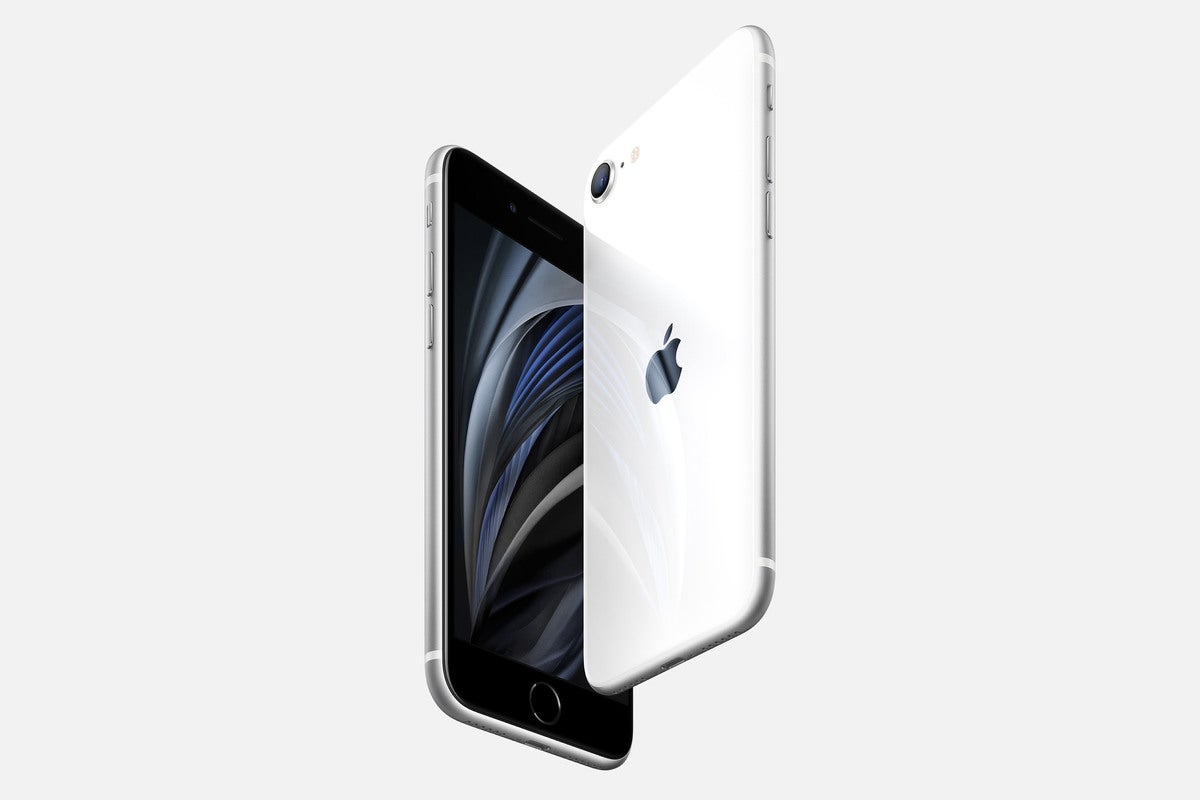 It has taken four years, but Apple finally updated its budget, pocket-friendly iPhone SE. The original model took the internal hardware of the iPhone 6s (about six months old at the time) and crammed it into the smaller body of the iPhone 5s. The new model takes the same approach, stuffing a lot of the iPhone 11 hardware into an iPhone 8 body.

Is this the iPhone SE for you? Well, the $399 price is certainly very attractive, but it’s only a bargain if it’s a good fit. The iPhone 12 might cost more, but if you’re going to be happier with it, you might want to wait. Do the following statements sound like something you would say?

Update 04/28/20: Updated to reflect that the iPhone SE does indeed take Portrait Mode selfies with the front camera.

iPhones are too expensive

Well, you might as well jump on the new iPhone SE, unless you want to wait for Apple to start selling refurbished models. Every iPhone on the horizon is expected to cost hundreds of dollars more.

iPhones are too big

If you miss the size of the old iPhone SE, I’m sorry to inform you that iPhones that small are just not coming back. But the iPhone SE is still a lot smaller than every other modern phone Apple currently sells.

Look at the comparison below (from the excellent Phone Arena size comparison tool). Until today, the iPhone 11 was the smallest new iPhone; the iPhone SE (which is essentially identical to the iPhone 8 in the center below) is quite a bit smaller. Still, the original iPhone SE, on the right, is still much more petite. 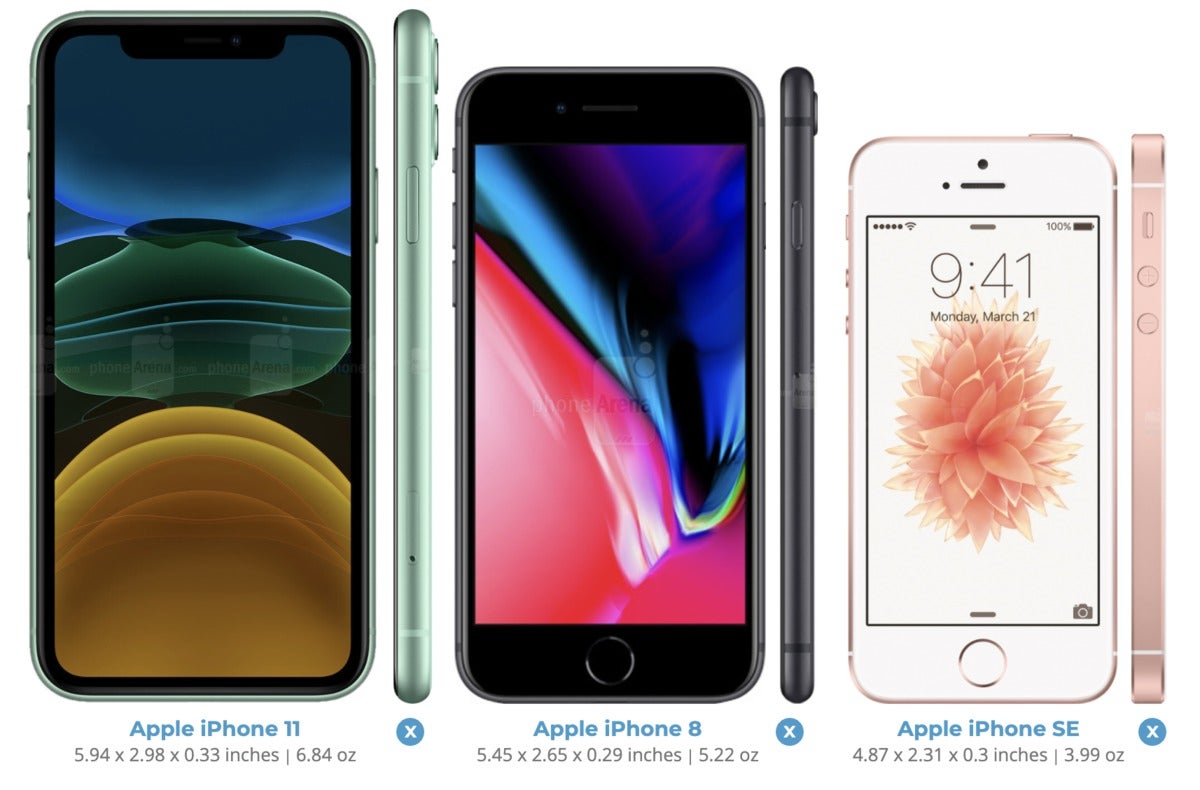 The iPhone 8 is the same size as the new iPhone SE—much bigger than the old SE, but smaller than the iPhone 11.

But wait! The latest rumors about the iPhone 12, due for release this fall, hint that the smallest size may have a 5.4-inch display. With no top or bottom bezels like the iPhone 11, that would make it very nearly the same size as the new iPhone SE. If you want a more modern phone with dual cameras and Face ID and so on, even if it’s more expensive, you might want to wait for the fall to see if that rumor proves true.

Once you get used to it, unlocking your phone with Face ID is faster and easier than Touch ID. And it’s easier to do with wet or dirty hands. Apple never collects your face data at all—it stays encrypted on your iPhone and they don’t even have the key. 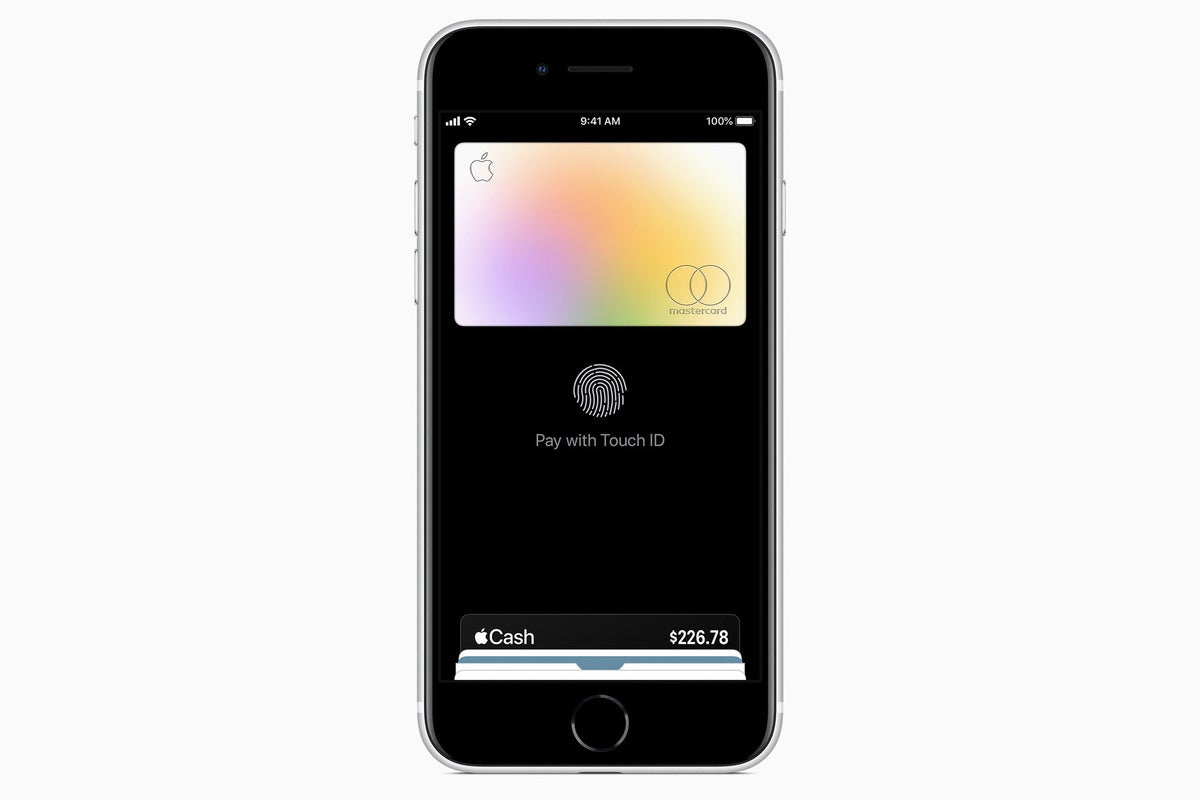 If you’re not a fan of all this face-unlocking stuff, good news, the new iPhone SE still has a Touch ID Home button.

But not everybody prefers Face ID. Some miss the good old Touch ID Home button. If you want to return to the days of Home buttons but don’t want to buy an old phone, the iPhone SE is your chance.

Of course, you give up a few other features…

I want to use Memoji and Animoji

I really want to use AR apps

The iPhone SE will certainly work with the current crop of augmented reality (AR) apps on the App Store, just as the iPhone XR can do so with only one rear camera. 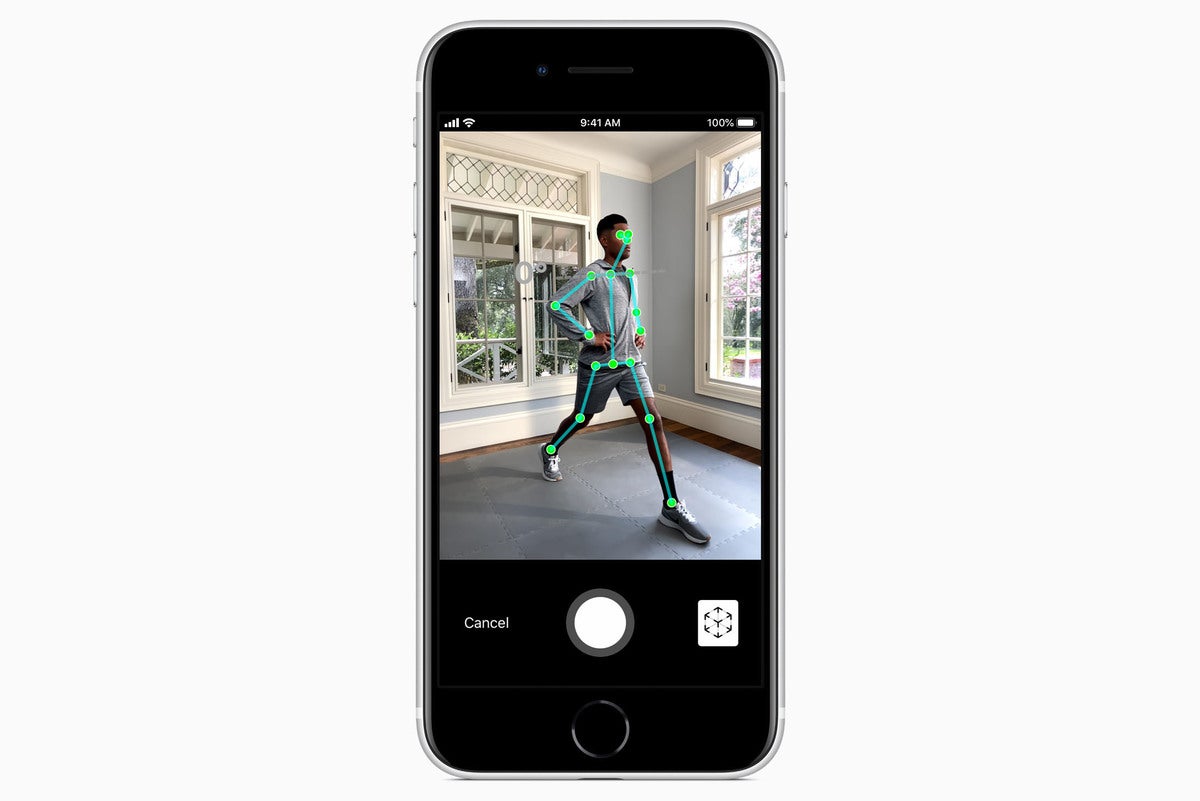 The new iPhone SE will support AR apps, but likely not as well as the upcoming iPhone 12 Pro with its LiDAR camera.

But if you’re really into AR, you’ll want to wait for the iPhone 12 Pro, which is almost certain to have the LiDAR sensor found in the new iPad Pro. That will make a big difference in AR apps. You’ll be able to launch into them immediately without waving moving your phone around to scan the environment first, and AR placement will be faster and more accurate.

Of course, it will cost you. The LiDAR sensor is rumored to be only found in the iPhone 12 Pro, which will probably cost around $999. You could buy two new iPhone SEs for less than that!

I care most about camera quality

The good news is that the iPhone SE appears to have the same rear-facing wide angle camera as the iPhone 11 (12MP and f1.8). With the A13 chip inside, it’s capable of nearly all the same image and video processing, including all the portrait lighting effects and Smart HDR. However, the iPhone SE does not support Night Mode.

The bad news is that you only have the one rear-facing camera: no telephoto lens, no ultra-wide lens. You can do Portrait Mode, but as with the iPhone XR, it only works when it detects a person’s face.

The front-facing camera isn’t as good on the iPhone SE as on other modern iPhones. It’s a 7MP camera that seems identical to that found on the iPhone 8, and is limited to 1080p video at 30fps. The A13 Bionic processor enables better image processing with it, but the hardware is a little aged. 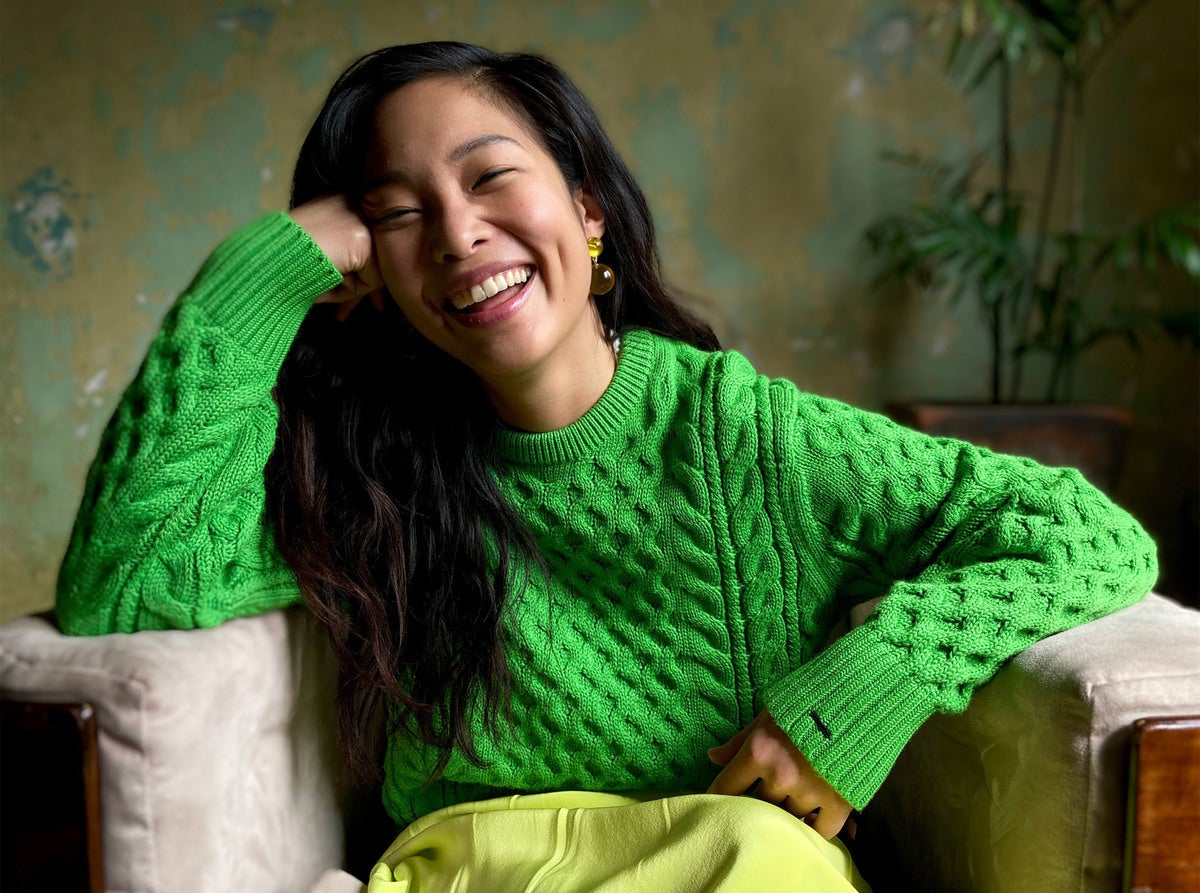 The iPhone SE camera is almost as good as the iPhone 11, but there’s just one rear camera, and no Night Mode.

So the photo and video quality from the rear camera should be up to par with the iPhone 11, but you don’t have as much flexibility. Of course, we expect the iPhone 12 in the fall to have an even better camera. It you’re concerned with quality more than price, you might want to wait.

Battery life matters most to me

If you want really epic battery life, you might want to look beyond the new iPhone SE. While we don’t expect it to have bad battery life, it should definitely not last as long as the iPhone 11 or iPhone XR.

Apple says it should get 12 hours of video playback or 8 hours of streaming video. For the iPhone 11, those figures are 17 hours and 10 hours, and the iPhone XR is about an hour less. 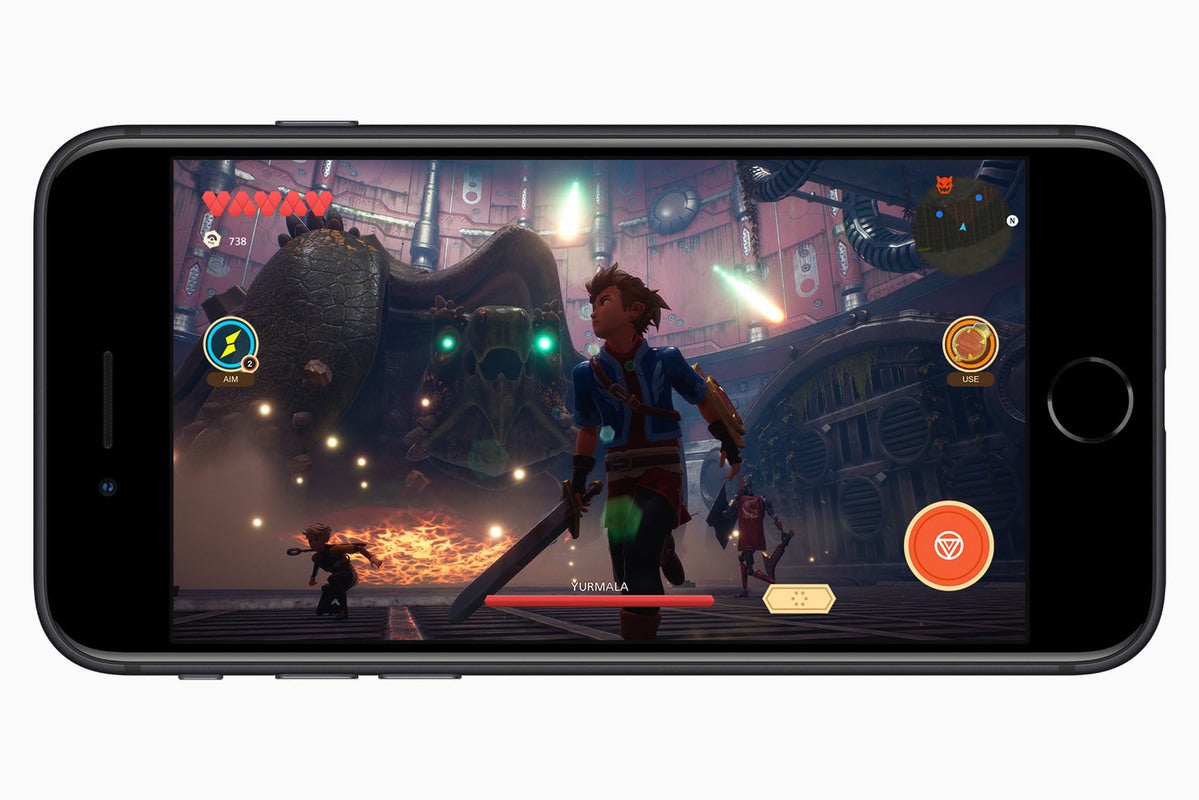 Don’t expect to game all day on the new iPhone SE without a charger handy.

In essence, the new iPhone SE should get about the same battery life as the iPhone 8. That’s impressive when you consider the phone is way more powerful with the A13 Bionic processor inside, but disappointing when you compare it to more recent iPhones that have dramatically improved battery life.

5G is the future

Right now, 5G isn’t a critical technology for your iPhone. You can’t get a good 5G signal in most places, and even when you can the benefits are modest compared to the hype. There’s not much you can do with 5G right now that you can’t do with a good 4G LTE signal.

That won’t always be the case. The carriers will be working overtime over the next year or two to blanket the country with 5G coverage and improve its performance. It’s not like 4G LTE is going to stop working for a long time, but over the next several years, 5G is going to be grow to be much faster and better than 4G LTE.

If you’re buying a phone to keep for four or five years, you might want to wait for an iPhone 12, which is expected to support 5G networks. It won’t make a big difference this year, but in 2022 you could be glad you did.

iPhones are expensive! Some people want the latest model every year, and others just want something reliable that they can keep for five years until it stops getting software updates.

While the iPhone SE is relatively inexpensive, it’s also built using the A13 processor—Apple’s newest phone chip. That means it’s likely to be supported by new iOS updates for years to come. You’re better off buying a new iPhone SE than a used or refurbished older iPhone because the older model isn’t likely to be supported by iOS updates for as many years.

If you really want longevity, you might consider waiting for the iPhone 12 this fall. It’s expected to cost a lot more, but feature a newer A14 processor (along with other fancy features)—five years from now, Apple may cut off iOS support in the A13 while still offering updates for products that use the A14. Because the iPhone 12 will have a Truedepth module for the front camera, it will support whatever future features Apple comes up with that require it.

And of course, if you’re keeping your phone for four or five years, you want one with the best camera possible. That means waiting until the fall and spending more money, but years from now you may be glad you splurged on a phone with a better front-facing camera and a rear camera capable of Night mode.

Note: When you purchase something after clicking links in our articles, we may earn a small commission. Read our affiliate link policy for more details.