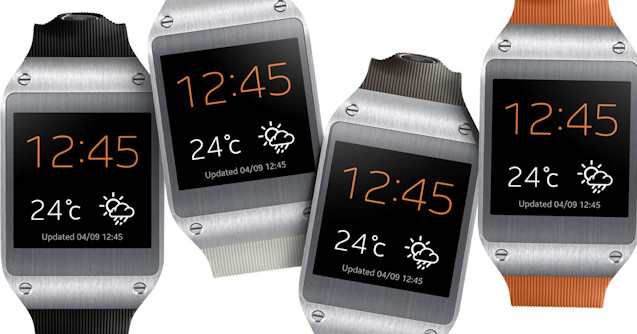 Expect to see a host of new wearables from Samsung this year, including some that were designed, in part, in San Francisco.

“2014 is actually going to be a really big year,” said Dennis Miloseski, head of studio for Samsung Design America. “We are planning some products around the launch of our flagship devices.”

Miloseski noted that Samsung tends to have two major launches–the Galaxy S phone in the spring and the next Note phablet in the fall.

As wearables evolve over time, Miloseski said there will be a mix of devices — those that can operate independently and those that rely on a smartphone for part of their functionality. Miloseski said that there is an appeal to devices that don’t depend on a nearby phone, but said given the amount of battery capacity in, say, a watch, it is highly efficient to use the GPS capabilities of a nearby phone rather than build in that battery draining feature.

“They are in their infancy right now where battery life is really a challenge,” he said. “It’s actually intelligent to leverage the fact it is a tethered device.”

It’s not only the features that need to get better, though. It’s also the fashion of the devices.

Miloseski said it is one thing to have a big phone that you can stash in your pocket, but by definition, wearables are omnipresent.

To reach men and women, young and old, Samsung and other tech companies need to create more stylish products. That echoes a point also made earlier Tuesday by Sony CEO Kaz Hirai.

“You have to look at the tastes that individuals have,” Miloseski said. “It is something that is visible on your body and it is a part of you.”

It’s part of an overall transition that Samsung hopes to make from tech company to lifestyle brand.

Miloseski, who used to work at Google, took some shots at Google Glass, saying wearables need to provide information at a glance without turning the people using them into cyborgs.

“How can we enable technology to recede?” he said. “We have the ability to make technology blend in with your life.”

This article originally appeared on Recode.net.