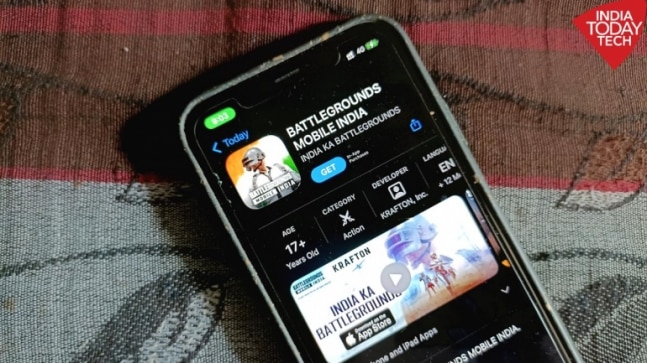 Krafton will give all the iOS players of Battlegrounds Mobile India the rewards that Android users have so far been getting. The BGMI iOS game is now available to download on the App Store.

Battlegrounds Mobile India, popularly referred to as BGMI, has finally arrived on the iPhone. After a wait of over a month since the Android launch, Krafton on Wednesday released the desi avatar of PUBG Mobile, conveniently called Battlegrounds Mobile India, on the App Store. The BGMI iOS game is free to download on your iPhone or iPad, but there will be in-game purchases for things like the Royale Pass.

The app description of Battlegrounds Mobile India on the App Store shows iPhone players will be able to participate in all India-centric events. Plus, they will be eligible for all the rewards that Android users have been getting all this time, including the latest 50M download reward.

The size of the BGMI iOS version is 1.9GB. Krafton has put this game under the 17+ category on the App Store, as well. This means that the game’s policy requires underage players (those who are not 18) to involve their parents or guardians and provide their consent through the mobile verification system. Back when I tried this verification system on Android, I found there are not enough checkpoints in the game that can actually verify if you are providing your guardian’s consent. Anyone can easily opt for the mode meant for people over 18 and the game does not ask you to verify your age in this mode. The BGMI’s iOS version is going to have the same bleak system for the age verification of players.

Since Apple requires developers to list out the privacy information of their app, Battlegrounds Mobile India has all of them. First, under the “Data Used to Track You” category, the game shows that only the “user content” will be used for tracking and nothing else. This means Krafton will use your account details to track you. Coming to the next category, you have “Data Linked to You”, under which Krafton has mentioned “user content” and “identifiers”. Under the “Data Not Linked to You” category, you have “usage data” and “diagnostics”, which means that your data is going to go to Krafton’s servers as anonymous so that you cannot be identified. The privacy nutrients for Battlegrounds Mobile India are pretty basic and do not come across as scary in terms of overstepping what most users deem is a boundary for their online privacy.

Meanwhile, Krafton has kicked off the Lobby Screenshot Contest, wherein players have a chance to win a free Supply Crate Coupon by sharing a photo with their squad in the lobby on social media and tagging Battlegrounds Mobile India on it. The contest will run for a week.